A warm hollow in the cold


It was winter. The depths of December. The sky had become dark. The ground was muddy when it wasn't frozen over entirely. The cold winds blew through the robin's feathers as she huddled in the partial shelter of a hollow of a great old plane tree. 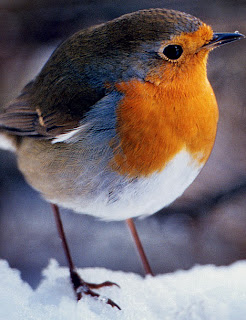 The cold had killed off all the plants the robin relied on. The insects had gone underground now and were safely hidden as they underwent their magical transformation. The autumn's seeds had vanished too - picked over thoroughly in the past months.

And now she was not sure which was worse - the biting cold or the ache of her empty belly.

"There is no chance of reaching the spring", she thought. She had begun to lose hope. She despaired of finding enough food to survive. She began to welcome the cold into her breast. "Why not let it in so this suffering will end more quickly?" she thought. She stepped out from the hollow to bear the full brunt of the cold wind.

Just then, she heard a shaky-sounding "hello." She jerked her head first this way and that, but it wasn't until she looked up that she saw a shivering red squirrel looking down at her from a higher branch. "Hello" said robin. "You look cold." So do you, said squirrel. "Yes" she replied. "And hungry too." 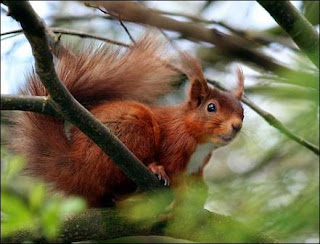 "Hungry? Well, I can help with that. Follow me", said squirrel and he leapt from branch to branch until he reached a spot between several branching tree roots. Robin landed beside him. With a few seconds of scratching at the earth, squirrel uncovered a small stash of seeds. "Help yourself", he said, "I have stores like this all over the place."

Robin began eating so quickly, she forgot to say thank you. When she realised it, she was deeply apologetic and embarrassed. Squirrel just urged her to keep eating: "You have to keep your strength up."

When robin had eaten her fill, she said to squirrel "thank you so much. You have been very generous. Sadly, I fear I have wasted your precious food as I am so cold I will soon freeze to death." She noticed then that squirrel was shivering heavily. "Perhaps" robin said, "we could both fit into my hollow in the tree. It might be crowded, but we could try."

So squirrel scampered and robin flew back up the tree.

Indeed, the hollow of the tree was barely big enough to hold the two of them. They managed to fit in together, but they were so tightly wedged they could hardly move.

"Oh no! This is terrible" said robin. I'll go look for another place to shelter and you can stay here."

"No - wait!" replied squirrel. "You're not shivering anymore! I'm not either."

Although the space was cramped and more than a little bit uncomfortable, it kept both creatures very warm.

And so robin and squirrel endured the harsh winter together.

In the spring, they prepared to go their separate ways. Robin spoke first "You know, you saved my life the day we met. I had chosen to let myself freeze." And squirrel replied "that's why I was in the wind too. I was ready to give up. It was only because we met and joined our struggles together that we survived."

Squirrel scampered off. Robin flew off. Both full of hope and much the wiser for having met on a bitter December day.
Posted by Unknown at 11:00 1 comment: