Human beings need images to think about complex things. We need to simplify and compare and picture in order to hold a multifaceted concept and we need these images even more if we are to successfully communicate such concepts to others.

Peter Bowden, a Unitarian Universalist congregational growth guru, recently started a fascinating thread in the UU Growth Lab on FaceBook by asking about metaphors for Unitarian/Unitarian Universalist congregations. The question is not about how to market our faith - it is much deeper than that. It asks about the essence of our congregations. What images most closely captures the central purpose and identities of the transformative communities of faith that we aim to create and sustain.
Over the years, I have heard many congregational metaphors tossed about: A "safe harbour" is a common one that emphasizes shelter and protection - a sense of withdrawal from a difficult world into a safe place. Certainly part of the answer, but only one part.
Abigail Van Buren famously proclaimed "A church is a hospital for sinners, not a museum for saints", capturing another important aspect of congregational life: we are not here to create congregations of perfect people; we must recognize that each of us is wounded and in need of healing and transformation. Only when we come together in our vulnerability and acceptance can we be transformed.
Other congregational metaphors speak to our acceptance of diverse ways of thinking and believing: we are a "mosaic" of many colors, shapes and textures but come together to create something of great beauty - to create an image that we can not see in our separateness. We are a "house" where we understand that the light of the sacred is the same no matter which of many windows it shines through.
"Family" is a commonly raised metaphor, although we should always remember how hard it is to enter a family! Does anyone really want to be the new brother-in-law that nobody trusts for the first 20 or 30 years?
There were many other responses in the Growth Lab which I won't repeat here as they may be original and I have not asked permission. Suffice it to say that they variously reflect the experimental, educational, and energetic natures of a congregation.
How about this: The ideal congregation is "a base camp for life's expedition."
I understand Unitarian congregation at their best to be places for rest and for equipping and organizing the journey to the heights of justice and spirit. 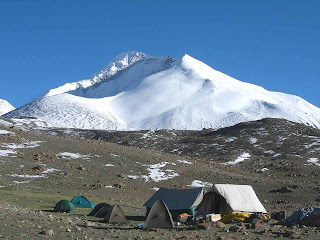 Yes, there are times when we are exhausted and hurt and maybe ill, and our congregations must be places for rest and restoration. They must be a places where we can tend to one another in pursuit of healing.
But a congregation must be much more than a refuge. It must be a place that prepares us for the true work of our lives - the mountains we must climb to become increasingly full and whole souls. These are mountains of self discovery - of spirit and love and depth. And they are mountains of outer work - the work that we do to help make our world a place that is more accepting, more compassionate, and more just.
Come into the base camp. Whether you are sore and tired and need of rest or fully ready for the climb. We will tend to one another's needs. We will journey together. With dedication, compassion, commitment, and love, we will ascend life's summits.
Posted by Unknown at 14:19 3 comments:

How crazy is that?

I received yet another notice today about a group where I can use past-life regression to explore my previous existences so I can better understand how to live well and happily in this life.

I declined the invitation. I'll work on one life at a time, thanks.

But while I do want to decline, I don't want to do so derisively - with a scornful laugh at "those foolish New-Agers." I find myself torn between having that dismissive reaction and wanting to keep myself open to all kinds of ways of thinking, believing, and practicing.

I am not surprised at all that the traditional religionists are ready to dismiss the New Agey stuff without a second thought. They don't have to wrestle with such questions. For them, it is either part of the accepted dogma or it is nonsense.

Now, let's recognise here that if anyone came to you with a modern day story of a god walking around the earth, getting executed as a criminal, and then coming back to life - and that believing the right stories will guarantee you a place in heaven - you would be at least as dismissive as many of the people who believe that story are of the healing power of crystals.

Just as the great age of a story should not make it more credible, neither should the newness or unfamiliarity of a story or belief make it incredible.

What is an open-minded Unitarian to do? By what standards are we to evaluate beliefs and practices, whether old or new?

Unitarianism has long placed a strong emphasis on the use of reason, but while this has been interpreted by many as a requirement that beliefs be scientifically and logically sound, this is neither historically accurate nor - I would argue - a spiritually helpful stance. Spirituality and religion are about having faith - about holding onto hope - about working for justice even when these positions are plainly irrational. We believe in love not because it is about to break out in the world and break in to our lives, but because we faithfully cling to our conviction that this is what the world needs and that we will do our part whether or not it is rational to do so.

In the UK, about five-fold more people say they are "spiritual but not religious" than attend any kind of traditional religious observances. Because they are exploring beyond the bounds of western tradition, some of us are ready to mock and dismiss them. If so, then we are the ones who will be relegated to history's vast dustbin.

The "spiritual but religious" are doing what human beings have always done - seeking new ways to make meaning in their lives. We ignore them at the risk of our own increasing irrelevance.

Let's return to the question I posed above: By what standards are we to evaluate beliefs and practices?

The standard must not be scientific. And even though there is some truth to the notion that better systems survive the test of time, there are some truly awful beliefs and practices that have done so.

I would begin by looking at the organisations promulgating a particular path. Have they made themselves wealthy? Do they use coercion to keep people "in the fold"? Do they condemn those who believe differently? If yes, then run - do not walk - in the opposite direction.

My test has more to do with how a belief or practice leads its adherents to live. If the path makes its followers more loving, more connected, more respectful, and more ready to seek justice for all beings, then I'm ready to take a closer look.

Past-life regression fails many of these tests, but I will not assume that everything new is bad. And that - quite simply - is a part of my faith.